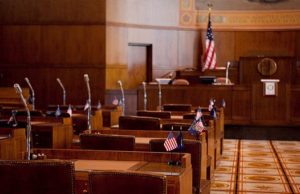 While McConnell thinks the measure has the best chance to get signed into law, it is unclear whether any Democrats will support it and give it enough backing to pass the Senate. The proposal would enshrine legal protections for 1.8 million young immigrants brought to the U.S. illegally as children but restrict legal immigration — a concession the minority party in Congress opposes.

McConnell called the measure a “fair compromise” which includes a “compassionate resolution” for the immigrants protected by or eligible for the Obama-era Deferred Action for Childhood Arrivals program. Trump decided to end the program in September, with a phase-out date of March 5.

This week, the Senate will have an open debate on immigration legislation, and the Republican proposal is one of many lawmakers are expected to vote on.

“It’s our best chance for producing a solution that can actually resolve these matters. … It has my support,” McConnell said Monday on the Senate floor.

Trump has proposed a plan to protect the 1.8 million immigrants and create an eventual path to citizenship. He also seeks increased funding for border security, limits on family sponsorship for immigration to the U.S. and an end to the diversity visa “lottery” system.

The GOP proposal from several senators including Majority Whip John Cornyn of Texas and Chuck Grassley of Iowa seeks to mirror the terms set out by Trump.

“Now is not the time nor the place to reform the entire legal immigration system. Rather, this is the moment for a narrow bill,” the New York Democrat said.

A proposal from Sens. Lindsey Graham, R-S.C., and Dick Durbin, D-Ill., would enshrine protections for the young immigrants and boost border security funding. But it would not include the curbs on legal immigration Trump seeks.