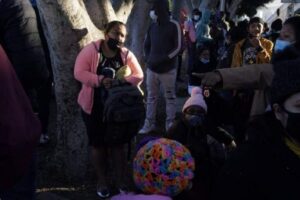 PHOENIX – U.S. Sen. Kyrsten Sinema of Arizona said she supports adding protections for undocumented immigrants to the federal spending bill but has some reservations.

“I do support the immigration proposals that are being offered in the upcoming reconciliation package,” Sinema, a Democrat, said during a call with Arizona reporters Monday.

“I also recognize that there are legal limitations to what can be done in a reconciliation package.”

She explained she’s waiting to see what immigration policies can be included in the bill according to the Senate parliamentarian, who has rejected two plans already, including a path to legalization for some undocumented immigrants.

Sinema said she does anticipate the Senate will abide by the parliamentarian’s decision despite calls from immigration advocates to disregard it.

“But to be clear, Arizonans know I do support a comprehensive immigration reform with a path to citizenship for individuals who are Americans in everything but name,” Sinema added.

Meanwhile, Democrats in the House of Representatives are considering adding to the reconciliation bill a five-year parole that would allow some undocumented immigrants to stay and work in the U.S.

The protection would be renewable for another five years.

It has the support of Bob Worsley, a former Republican state senator from Mesa and co-chair of the American Business Immigration Coalition.

“We think that’s at least a way for this group of people who are here without documents to have some legal status and to come out of the shadows,” he said.

Worsley said an estimated 7 million immigrants would benefit from the parole and “could immediately work legally.”

He noted with more than 10 million job openings across the country, this could help address the current labor shortage.

“Some of them are already working in the fields, hotels, restaurants and construction sites,” Worsley said. “But employers are taking risks of not having them be legal, and this would take that risk away.”