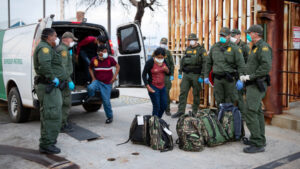 EL PASO, Texas (Border Report) – A group of nearly 100 North American scholars is calling on the Biden administration to phase out COVID-19 related expulsions of migrants at the border and for Mexico to refrain from stopping international asylum-seekers crossing its territory.

This, to reduce violence faced by international citizens passing through Mexico and facing a bottleneck at the U.S. border that forces them to resort to smugglers, the scholars said in a teleconference on Monday.

“As you increase the enforcement on asylum-seekers going through Mexico, what you get is people hiding, people taking more dangerous routes and getting involved with dangerous people along the way […] and it becomes a huge problem,” said Jeremy Slack, an associate professor in the Department of Sociology and Anthropology at the University of Texas at El Paso.

The scholars said they don’t see an “immigration crisis” on the border, but they fear prolonged and unnecessary detentions in the United States, mass expulsions of families and individuals to Mexico and a Mexican system lacking adequate services and resources could bring a humanitarian crisis. The scholars on Monday proposed: