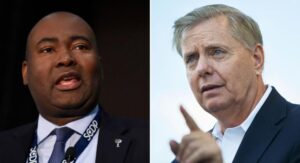 COLUMBIA — After a lull at the beginning of the coronavirus pandemic, illegal crossings at the southern U.S. border have begun rising again in recent months, resurrecting an issue that has bedeviled congressional negotiators for many years.

U.S. Sen. Lindsey Graham, R-S.C., has often been at the center of those negotiations, offering a pathway to citizenship for undocumented immigrants in exchange for stronger border security measures — a compromise that drew harsh criticism from some conservatives.

Since becoming a close ally of President Donald Trump, Graham has toughened his rhetoric on illegal immigration at times, prompting Democratic challenger Jaime Harrison to accuse the Republican incumbent of “playing towards our greatest fears.”

This is the fourth installment of an eight-part series in The Post and Courier leading up to the election that will lay out the policy views of Graham and Harrison on issues that matter most to South Carolina voters.

The responses to this candidate questionnaire have been edited and condensed for space and clarity.

Do you support a pathway to citizenship for the millions of undocumented immigrants already in the U.S.?