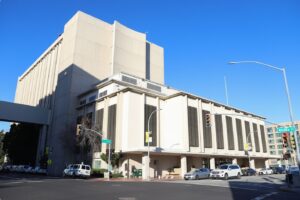 In 2020, Sheriff Carlos Bolanos released 26 immigrants to ICE, more than any other county in the Bay Area

A group of residents and local advocates will gather on Wednesday to protest the voluntary transfer of convicted immigrants by the San Mateo County Sheriff’s Office to federal immigration officials.

Led by the San Mateo County Coalition for Immigrant Rights (SMCCIR), the rally will take place both virtually and in front of the Superior Court in Downtown Redwood City, followed by the annual TRUTH Act Forum presented by the county. The San Mateo County Sheriff’s Office, Asian Law Caucus, the private defender panel and an individual who has been directly impacted by a U.S. Immigration and Customs Enforcement transfer will present during the forum.

“Whenever a government body gives ICE access to any community member, including through the county jail, then the county has to hold this public forum,” said Sarah Lee, a Community Advocate at Advancing Justice Asian Law Caucus (ALC) and SMCCIR collaborator. Lee said that she and the other organizers are protesting the voluntary practice of transferring immigrants, who are eligible for release, from the county jail to immigration officials.

The rally will be held at 400 County Center, Redwood City, at 5 p.m., followed by the TRUTH Act Forum at 6 p.m., which can be accessed through a public Zoom link.

According to the San Mateo County Sheriff’s Office, led by Sheriff Carlos Bolanos, released 15 immigrants to ICE in 2020, accounting for 62% of all Bay Area transfers and more than any other individual county. At least eight counties in California have ended the practice altogether, including Marin, San Francisco, Contra Costa, Napa, Santa Clara and Sonoma counties, which made no transfers in 2020.

By Leah Worthington for THE ALMANAC
Read Full Article HERE