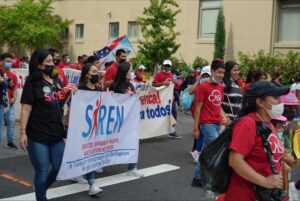 While some local advocates say the guidance is lacking, Rep. Zoe Lofgren, chair of the House Immigration and Citizenship Subcommittee, is applauding the new policy.

“(It is) an important step in the right direction, particularly after the prior administration undermined the rule of law and considered every immigrant an enforcement priority,” the congresswoman told San José Spotlight. “The updated guidance appears to strike the appropriate balance between prioritizing public safety and recognizing the importance of prosecutorial discretion in our immigration system.”

The San Jose Democrat said she is hopeful the new policies will be applied in a manner “consistent with the intent.”

The new guidelines state that officers with Immigration and Customs Enforcement (ICE) should not target individuals for arrest or removal solely because they are undocumented. ICE agents are instead directed to focus on undocumented persons considered a serious threat to public safety or national security.

“We need to exercise our discretion and determine whom to prioritize for immigration enforcement action,” Secretary of Homeland Security Alejandro Mayorkas said in a memo. “We are guided by the fact that the majority of undocumented noncitizens who could be subject to removal have been contributing members of our communities for years.”

In San Jose, which has one of the largest undocumented populations in the nation, some immigration advocates say the new guidance is lacking. At a downtown rally earlier this year, activists called for the roughly 11 million undocumented residents in the U.S. to receive immediate legal status.

“In terms of the positive, it does give ICE agents the ability to not pursue a case,” Servin said. “But they can use that same discretion to deport whoever they want.”