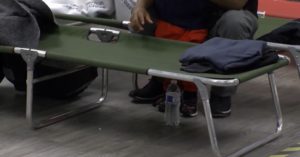 Lice, scabies, influenza, chickenpox and dehydration are some of the ailments children and their parents are suffering from when they arrive on the doorstep of the temporary migrant family shelter in San Diego. The shelter, run by Jewish Family Service, screens the families to check for communicable diseases. Many families have been brought to San Diego after multi-day stays at overcrowded detention facilities in Texas and Arizona.

On Wednesday, the House Oversight Committee is holding a hearing on the treatment of immigrant children in government detention facilities in response to a public outcry against “inhumane conditions” reported at migrant detention centers for children in Texas.

“By far the most common things we see are scabies and lice, which we treat immediately before those families are co-mingled,” said Doctor Jennifer Tuteur, who sees patients at the shelter. She is the Deputy Chief Medical Officer for San Diego County.

ince January, the shelter has received over 13,000 asylum-seeking families and treated 235 cases of influenza, 746 cases of lice, and 471 cases of scabies.

Tuteur says the quarantine of the migrants prevented the spread of the flu into San Diego.

“They get new clothes that have been donated, they get showers and then if they need to be isolated or quarantined families are kept together,” Tuteur said. “That all happens in very safe areas where they follow all of the environmental and infectious disease protocols so that none of those illnesses are passed along.”

In addition to communicable diseases, many children and families arrive at the shelter dehydrated and report they lacked access to sufficient water and nutritious food while in detention. Asylum-seekers also say they were held in cold facilities, referring to the detention center as “hieleras” or “ice boxes.” No treatment was known to be provided to the asylum-seekers while they were in custody.