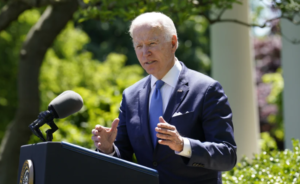 SAN DIEGO — Bah humbug! On the immigration issue, President Biden has turned into a real Scrooge.

Biden has broken campaign promises, reversed course on reforms, made false claims about what’s going on at the border, pretended that his enforcement tactics are more humane than those of President Donald Trump, rolled back protections for migrants, denied refugees a path to asylum and adopted some of the same Trump policies that he once pledged to end.

One minute, Biden is fixing sections of Trump’s “big, beautiful wall” on the U.S.-Mexico border — despite criticizing the international barrier and pledging not to build any more of it.

The next minute, Biden is preserving Title 42, which was created by the Public Health Service Act of 1944 to “protect public health” by keeping out foreigners.

It was a federal judge, and not the administration, that ordered the termination of Title 42 by Dec. 21.

It’s politics. The Democrat is terrified of being seen as soft on immigration. In an election year, he has wanted no part of video footage of migrants rushing across the U.S.-Mexico border.

It’s Biden’s good fortune whenever the federal courts tell him he can’t follow through with a controversial reform measure that the pro-immigration left supports. The president gets to shrug and say: “Oh well, I tried. The courts stopped me.” It’s classic Biden: Do nothing, then seek credit for doing nothing.

That’s what happened earlier this year when the Supreme Court blocked the Biden administration from implementing a directive from the Homeland Security Department. The order paused deportations for individuals unless they committed acts of terrorism or espionage, or posed “egregious threats to public safety.” When the justices told the administration that it had overstepped, there must have been relief at the White House.