Home Politics Ron DeSantis Does Not Understand How Immigration Works 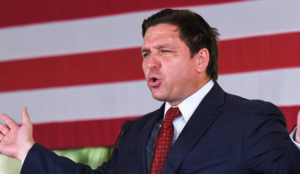 Florida Gov. Ron DeSantis put his own spin on a popular tactic of Republican presidential hopefuls this week when he sent flights of migrants to Massachusetts. While the governors of Texas and Arizona have bused migrants to New York and Washington, D.C., DeSantis chartered two private planes to scoop up people, most of whom had made their way to the U.S. from Venezuela, all the way in Texas (well outside his own jurisdiction) to drop them off on the liberal island of Martha’s Vineyard. Although they were told they would be given job opportunities and aid at their destination, their arrival was a surprise to residents and officials.

This approach to immigration has been a mainstay of the far right in recent years, and none have championed it more fervently than Donald Trump and his loyal followers.

At a news conference on Thursday, DeSantis was quick to claim credit and appeared to bask in saying Florida is “not a sanctuary state” and that the “burden” of immigration “shouldn’t just fall to a handful of red states.”

This approach to immigration has been a mainstay of the far right in recent years, and none have championed it more fervently than Donald Trump and his loyal followers. But for all the rhetoric of looking to our past to Make America Great Again, and the reverence bestowed on Ronald Reagan as the Republican archetype, today’s Republican leaders are quick to memory-hole the fact that Reagan was the architect of our current immigration system.

In his immigration policies and statements, Reagan led with the dignity of human life, followed by a practical recognition of the significant economic benefits of renewing the labor force from abroad. For today’s Republican governors, migrants are simply pawns in a greater game of scoring points against the libs. For Govs. Ron DeSantis of Florida, Greg Abbott of Texas and Doug Ducey of Arizona, fixing the immigration system comes second — the cruelty is the point.