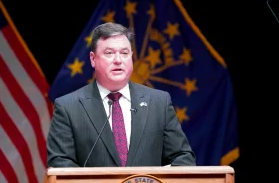 The suit, filed Monday in U.S. District Court of Northern Indiana, also claims a growing number of fentanyl overdoses throughout the state and a supposed influx of sex offenders in the country are both tied to a “record number” of immigrants entering the United States on a daily basis.

Rokita said in the suit the policies have caused irreparable harm to Indiana and asks the court to order the Biden administration to enforce current immigration laws and pay the state costs as well as reasonable attorney fees.

Of the 100,000 to 124,000 undocumented people in Indiana, roughly 53 percent of are uninsured while another 17 percent have incomes below the poverty line, the lawsuit claims. That costs the state roughly $549 million a year, an amount that will only grow as more find their way to Indiana, according to the lawsuit.

“The Defendants have disregarded and ignored the plain language of (federal immigration law) by multiple means, including promulgating regulations contrary to congressionally enacted statutes and contriving the release of hundreds of thousands of illegal aliens from the border into the interior of the United States,” the lawsuit said.

Rokita also named the U.S. Department of Homeland Security, The U.S. Citizenship and Immigration Services, U.S. Immigration and Customs Enforcement and U.S. Customs and Border Protection as well as the United States as defendants in the suit.

The administration is not detaining or questioning people found at ports of entry or at borders as it should, the suit said, and is instead releasing many into the country without proper review.

Biden’s administration is also actively eliminating ways for agencies to detain more immigrants or build larger facilities, according to the lawsuit.