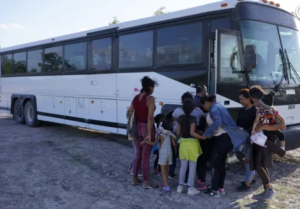 Back when Democrats were the party of the working man, they would have welcomed news that low-wage workers were in a position to demand higher pay.

Whether under President Donald Trump or in today’s tight labor market, the left’s transformation into the party of large corporations and the professional-managerial class is evident from its discomfort with low-wage workers being able to raise their earnings.

Before COVID, the Trump administration proved we could combine rapid economic growth with reduced immigration — creating a tight labor market in which workers, especially those in the lowest-paying jobs, were able to increase their real (inflation-adjusted) pay for the first time in generations.

The immigrant population continued to grow under Trump, of course, but much slower than under his predecessor. We estimate that the total foreign-born population (legal and illegal) grew by an average of 42,000 a month under Trump before COVID, compared with 76,000 a month during President Barack Obama’s second term.

That slower immigration had tangible results: In late 2019, after 40 years of stagnant or falling real wages, the bottom 10th of workers saw their earnings jump 7% from the year before while full-time workers without a high-school degree got a hefty 9% raise — both far above the low inflation at the time.

COVID crashed all that, but as the economy revived, a tight labor market returned — and with it increased worker power to negotiate for higher pay.

The left was uncomfortable with that worker power under Trump because Orange Man Bad; The New York Times even highlighted “ethical concerns” with black Americans getting higher-wage jobs after an immigration raid removed illegal workers from a Mississippi chicken plant.

The problem today with greater economic power for workers is that it supposedly contributes to inflation (which it somehow did not do under Trump). And the solution? As always, more immigration!