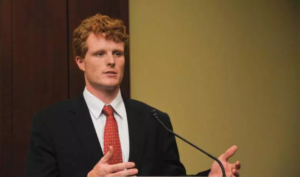 ROVIDENCE, R.I. (WPRI) — Massachusetts Congressman Joe Kennedy III is the only local House Democrat who supports decriminalizing illegal immigration, as Rhode Island’s entire congressional delegation opposes the idea, according to a WPRI 12 survey of their offices.

Amid the ongoing furor over the Trump administration’s border policies, a growing number of Democrats — including some presidential hopefuls — have said Congress should repeal section 1325 of the federal code so that entering the country illegally is no longer a criminal offense. Instead it would a civil violation.

Kennedy, an outspoken opponent of the administration on immigration who recently visited a migrant detention center at the Texas border, argues the change makes sense.

“Section 1325 has helped the Trump administration implement the mass criminalization and dehumanization of those seeking safe harbor on our shores,” Kennedy said in a statement.

“Repealing this statute would preserve our ability to deport those who pose a true threat, protect those legally pursuing asylum, and move us closer to an immigration system that is just, fair and humane,” he said.

Massachusetts’ two U.S. senators — Democrats Elizabeth Warren, a candidate for president, and Ed Markey, up for re-election in 2020 — share the same view as Kennedy.

It’s a different story in Rhode Island, where all four Democrats in the congressional delegation say they oppose repealing section 1325.

“Section 1325 is not the cause of Trump’s failed immigration policy and repealing it would not fix our broken immigration system,” Chip Unruh, a spokesperson for U.S. Sen. Jack Reed, said in an email.

“The only way to do that is through serious, comprehensive bipartisan immigration reform like the kind Senator Reed worked on with Senator McCain that passed the Senate,” he continued. “Senator Reed believes in smart, strong borders, humane treatment of all people, and treating people fairly under the rule of law.”