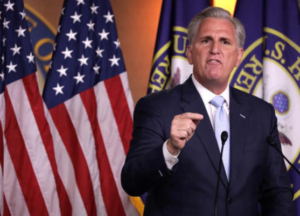 Amid a record number of border crossings, Republicans in Congress are amplifying their calls for more border security and threatening to impeach Department of Homeland Security Secretary Alejandro Mayorkas, setting the stage for a showdown with Democrats in the next session of Congress over a whole host of immigration issues.

Republicans and Democrats have long struggled to come to bipartisan agreements on immigration issues, and the next Congress, which will be split between a Democrat-controlled Senate and Republican-controlled House, is likely to face even more legislative stalemates on the issue.

Before Republicans claim the majority in the House in January, Senate Democrats are pushing to pass a bill that would create a pathway to citizenship for so-called “Dreamers” or recipients of the Deferred Action for Childhood Arrivals program, amid a court battle that threatens the program’s future.

Republicans are keen to resume former President Donald Trump’s efforts to build a wall at the southern border, and Sen. Rick Scott (R-Fla.) introduced legislation earlier this year that would facilitate the project, but it has yet to make it out of committee and is unlikely to do so next year when Democrats retain control of the Senate.

Title 42, a Covid-era policy that allows U.S. Customs and Border Protection officials to turn away migrants at the border, is on its death knell after a judge last week ordered the federal government to halt the practice, but 15 Republican-led states filed legal action this week that could lead to an appeal, and a group of bipartisan House members came out in favor of the program months ago when President Joe Biden said he would end it.

Rep. Kevin McCarthy (R-Calif.), while visiting the border in El Paso on Tuesday, said Republicans will “investigate every order, every action and every failure” to determine if they can impeach Mayorkas,