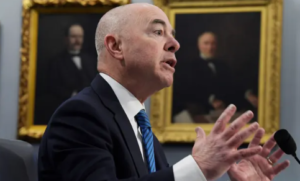 Four years after Republicans embraced Donald Trump’s nativist and often racist playbook in an attempt to keep control of Congress, the party is once again placing the volatile politics of immigration at the center of its midterm election strategy.

From the US-Mexico border to the US Capitol, in hearing rooms and courtrooms, Republicans are hammering the issue. At the forefront of the debate is a once-obscure public health order invoked by the Trump administration in March 2020 ostensibly as a means for controlling the spread of the coronavirus along the south-western border.

Seizing on a decision by the Biden administration to lift such “Title 42” border restrictions, Republicans have sought to paint Democrats as pursuing an extremist immigration agenda that they say has cost the nation its very sovereignty.

The provocative and often misleading messaging campaign was on full display when Alejandro Mayorkas, the secretary of homeland security, testified on Capitol Hill.

For more than eight hours, across two days, Republicans pelted Mayorkas with accusations and insults, demanding he accept the blame for what they described as dangerous and dire conditions along the 2,000-mile border with Mexico.

In another tense exchange, Ken Buck of Colorado said his constituents believed Mayorkas was guilty of treason and deserved to be impeached – something conservatives have vowed to pursue if they win the House.

Mayorkas forcefully defended the administration’s handling of the border and said it was up to Congress to act.

“We inherited a broken and dismantled system that is already under strain,” Mayorkas said. “It is not built to manage the current levels and types of migratory flows. Only Congress can fix this.”