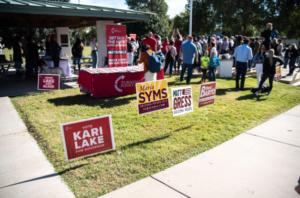 PHOENIX, Arizona — Republicans in Arizona are zeroing in on issues like undocumented immigration, rising inflation and potential fraud ahead of the 2022 midterm elections.

Known as a “swing state,” where Republicans and Democrats receive an almost equal amount of support from voters, Arizona has been recognized as one of the key barometers of how the US will choose its leaders.

Early voting already kicked off but voters can still cast their ballots until Tuesday, November 8.

Nancy Barto, a Republican candidate running for a seat at the state senate, noted that their fear of getting cheated in the upcoming polls has actually become a point of motivation for supporters.

“We’re already seeing great involvement by conservatives, Republicans, and independents that are voting republican in the coming elections to overcome that doubt,” Barto told a group of journalists at the Turning Point USA Super Saturday Event.

Around 40 to 50 people showed up at the Doubletree Ranch rally held in Scottsdale. Organizers at the event noted the presence of foreign media who stood out with their face masks, and falsely claimed that the journalists were sent by the Democratic Party.

Suzy, one of the Republicans who agreed to speak to journalists, later expressed frustration over media’s coverage of the political party they support.

“Our message doesn’t get out because the media is an extended arm of the Democratic Party,” Suzy claimed. “All the big media are literally going hand in hand in bed with the Democrats.”

California State University Associate Professor Meredith Conroy noted in a column that Republicans do not fully trust the media except if it’s Fox News.

Republicans in Arizona cast doubt on the integrity of the electoral process even if another Republican is leading the Maricopa County Recorder, an office tasked to oversee the elections.