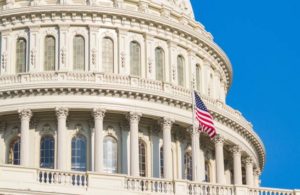 After three consecutive plans to address the DACA program went down in flames Thursday afternoon, Republicans who signed onto the bipartisan compromise bill that came closest to passage tore into the Trump administration for lobbying against it.

“I don’t think the President helped very much,” Sen. Lindsey Graham (R-SC), a cosponsor of the bipartisan plan, told reporters following the vote. “There’s probably 75 votes here for border security plus a pathway to citizenship for the DACA recipients, but you need presidential leadership. Without it, we won’t get there.”

Ahead of the vote, President Trump threatened to veto the compromise bill if it ever reached his desk, and he tweeted just before the vote began calling it a “total catastrophe.” He also threatened to veto any short-term fallback plan to protect DACA recipients from deportation.

Additionally, White House legislative liaison Marc Short told TPM he and his staff spent Wednesday evening calling individual Senate offices to convince them to vote down the bill because it did not get rid of the diversity visa lottery program or make the deep cuts to family-based immigration Trump had demanded.

“We’ve been pretty clear about our position,” Short said. “We feel that there are four pillars, and the Collins-Rounds bill failed to do two of the pillars. It was completely inadequate. And once we pointed out what the text actually said, it gave members pause about being supportive.”

At 1 a.m. on Thursday, Trump’s Department of Homeland Security put out its own statement torching the Senate’s compromise proposal, claiming it “increases the risk of crime and terrorism” and “would be the end of immigration enforcement in America.”

The bill ended up failing 54 votes in its favor to 45 against. The GOP bill based on Trump’s plan fared even worse, failing 39 to 60.

As senators began leaving the Capitol for a week-long recess, many expressed fear that no action would be taken before legal protections for hundreds of thousands of young immigrants expire on March 5, leaving them unable to legally work and subject to deportation.