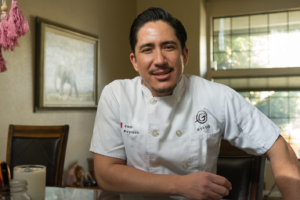 By age 13, Gustavo Velasco had saved enough money — earning 10 pesos every day he worked with his father selling chickens at a market — to buy himself and his mother one-way plane tickets from Mexico to Reno.

Upon arrival, he jumped straight back into work mode. He manned the drive-thru window for a Jack in the Box as soon as he was old enough, and it helped him practice English and develop communication skills with customers and coworkers.

“Most people think that’s shameful, but I was loving it,” he told The Nevada Independent.

Now 36, Velasco has run his own catering business since 2016 and is the executive chef for six Squeeze In breakfast restaurants in Nevada. His journey exemplifies the findings of a recent report: Immigrants made up 14 percent of business owners in Washoe County in 2019 and generated $78 million in business income, despite the challenges of obtaining U.S. citizenship.

The report, published in September, was prepared in collaboration with the Northern Nevada International Center, Reno-Sparks Chamber of Commerce, the City of Reno and New American Economy, a pro-immigration bipartisan research and advocacy group founded by former New York City Mayor Michael Bloomberg.

“Pushed to the side”

Velasco became a recipient of the initial Deferred Action for Childhood Arrivals (DACA) program when it was created in 2012. He’s among more than 800,000 people across the United States, including more than 11,000 in Nevada, protected from deportation and granted legal work authorization through the program, which bars people convicted with a felony or significant misdemeanors from being eligible.

Throughout high school, Velasco continued working — as a busboy in a Mexican restaurant, as a construction worker and as a dishwasher at a convention center, where he began to feel inspired by the work of a chef. He enrolled in the culinary arts program at Truckee Meadows Community College after graduating high school and began working at the Chocolate Bar in Midtown Reno, where he first learned to run a kitchen.