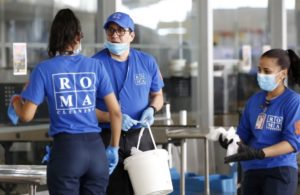 The following media release was shared on Friday by the Center for Migration Studies of New York (CMS):

The Center for Migration Studies of New York (CMS) today released a new report finding that 19.8 million immigrants work in “essential critical infrastructure” sectors, as defined by the Department of Homeland Security. According to its analysis of 2018 Census data, 69 percent of all immigrants in the labor force and 74 percent of undocumented workers are essential infrastructure workers, compared to 65 percent of the native-born labor force.

The United States has seen over a million cases of COVID-19 with the highest number of cases in New York, California, New Jersey, Massachusetts, Illinois, and Pennsylvania. The report shows that immigrants work at high rates in essential jobs that keep Americans safe, healthy, and fed—especially in these distressed states.

For example, immigrants comprise 16 percent of all healthcare workers in the United States, and:

50 percent of workers in California,
33 percent in New Jersey,
30 percent in New York,
24 percent in Massachusetts,
20 percent in Illinois, and
13 percent in Pennsylvania.
“In the midst of the pandemic and in the places where they are most needed, immigrants are working to stem the spread of COVID-19 and to sustain their fellow Americans, often at great personal risk,” said Donald Kerwin, CMS’s executive director. “These same workers are going to be essential to the United States’ economic recovery. They deserve our support and thanks.”