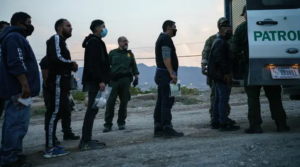 A report from the Senate Foreign Relations Committee Republicans called on the Biden administration to take specific action to stop illegal immigration.

EXCLUSIVE: A report obtained Tuesday by Fox News Digital from the Senate Foreign Relations Committee Republicans highlighted how President Biden’s policies are worsening the immigration crisis at the southern border, and suggested solutions to help curb the influx of illegal migrants.

The report, titled “Biden’s Border Crisis: Examining Policies that Encourage Illegal Migration,” labeled the influx of migrants at the border a “humanitarian catastrophe for the vulnerable people involved,” and noted the security concerns associated with the situation.

The number of migrant encounters at the southern border hit a record in May, reaching 239,416, according to Customs and Border Protection.

“Our report offers concrete recommendations to address the root causes of illegal migration and to achieve safety and security at our U.S. southern border and the region at large.”

The report drew a connection between the policies of the Obama administration and those implemented by the Biden administration, highlighting how Biden’s policies “incentivized illegal migration and undermined the ability of U.S. law enforcement to secure our borders.”

Specifically, the report called out Biden’s attempt to end Title 42 and focus on the “root causes” of illegal immigration as some of the factors contributing to the crisis at the border.