Home Resources Report: 1 In 2 In Central America Considered Migrating To The U.S. In 2021 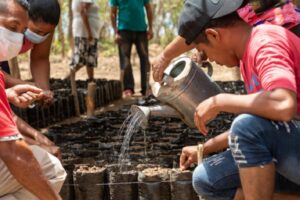 High costs of hiring a smuggler and fear of being separated from family members deterred most would-be migrants; study finds strong link between food insecurity and need to leave.

EL PASO, Texas (Border Report) – Almost one in two residents of Northern Triangle countries considered migrating internationally in 2021, a big increase over the 8 percent that expressed such intentions in 2019, a new report shows.

Citizens of Honduras, Guatemala and El Salvador polled by three international organizations cited poverty, food insecurity, violence, and weather-related events for their desire to look for a better life in the United States and elsewhere. But while 43 percent of those interviewed said they were considering leaving, only 3 percent had carried through with concrete plans.

More than 378,000 Central Americans have migrated to the U.S. in the past five years, according to the report by the UN World Food Program, the Migration Policy Institute and the Civic Data Design Lab at the Massachusetts Institute of Technology. U.S. Customs and Border Protection earlier reported encountering more than 1.7 million unauthorized migrants along the Southwest border in the fiscal year 2021 and almost 1.9 million overall including the northern border, air and seaports.

The organizations strongly link food insecurity to migration. Individuals who feel they can no longer properly feed their families are three times more likely to migrate than other residents.

“We are seeing an exodus from Central America as hunger and despair force many to migrate in search of a better life. Families are being separated and communities are being destroyed as poverty, climate change and now COVID-19 have left many people feeling they have no choice but to head north,” said David Beasley, executive director of the World Food Program.

Food insecurity rose in Central America due to economic fallout from the COVID-19 pandemic, the researchers say. The World Food Program in October estimated that the number of food-insecure people in El Salvador, Guatemala and Honduras grew from 2.2 million in 2019 to 6.4 million in 2021.