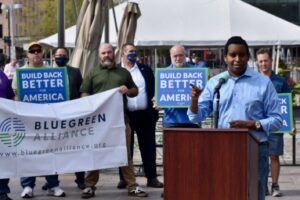 The massive social spending and climate bill that passed the U.S. House last month included some significant immigration reform provisions, though progressive Democrats were disappointed that it didn’t provide for a pathway to citizenship for millions of undocumented immigrants, as they’d originally hoped.

While it wouldn’t allow undocumented people to receive lawful permanent resident status, the so-called Build Back Better plan — the cornerstone of President Joe Biden’s policy agenda — does include some immigration provisions. The House version of the $2 trillion social spending and climate package would allow people in the United States in violation of immigration laws to retain work permits and be safe from deportation for five years.

U.S. Rep. Joe Neguse, a Lafayette Democrat, helped to get immigration policies included in the House version of the legislation. During a virtual press conference Thursday, Neguse called on the Senate to keep those provisions in its own version of Build Back Better, which is still being debated.

The House’s temporary protections from deportation and work permits for certain undocumented immigrants, as well as changes to green card processing, “fundamentally will change the lives of millions of individuals,” Neguse said.

The social spending package that passed the House would prevent the limited number of family- and employment-based green cards — which denote lawful permanent resident status — from being “wasted” when not all of them are issued in a given year, according to an analysis by the libertarian Cato Institute.

Marissa Molina immigrated to the U.S. as a child without proper documentation. She later applied and received protection from deportation under the Deferred Action for Childhood Arrivals program, known as DACA.

In July, a federal judge in Texas ruled that the program could not accept new applicants, but the Department of Homeland Security can still renew DACA status for people who were already enrolled.