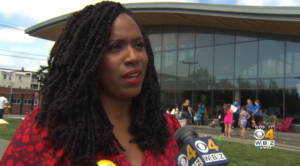 “They’re able to come here and get a free meal and it’s healthy,” the freshman congresswoman told WBZ’s Liam Martin.

She admits it’s good to be back home amid a whirlwind first seven months in Congress, during which she has become a rising star in the Democratic Party and a frequent target of President Trump. He recently told her and three other freshmen congresswomen of color to “go back” from where they came. Pressley and two of those congresswomen were born in the United States.

Pressley has called those attacks against the so-called Squad a distraction, but she did address on Friday the recent move by President Trump to persuade Israeli Prime Minister Benjamin Netanyahu to bar two of them, Democrats Rashida Tlaib and Ilhan Omar — both Muslims — from visiting Israel as part of a congressional delegation.

“These are U.S. representatives duly elected by their constituents and it’s really unprecedented and speaks to the climate that we find ourselves in currently,” Pressley said of the controversy. “But he’s hurting everyone; he’s an equal opportunity offender — the American worker, the American family, everyone is being impacted by the policies that are being rolled out by this administration, and that’s really what I’m focused on is how I mitigate that hurt.”

So we dove in on those issues, beginning with gun control, which has again become a topic of national conversation after recent mass shootings in El Paso, Texas, and Dayton, Ohio.

“I would like to see the Senate do its job,” Pressley said. “This Democratic-majority House, this Congress, has already reported out a universal background check bill, which is a floor on the way to real gun control. What we need is a federal assault weapons ban.”

House Speaker Nancy Pelosi has faced some pressure from within her own party to end the August recess and calls members back for a vote on an assault weapons ban.