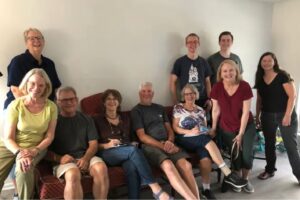 Ann Finch said that when she saw news stories about what was happening in Afghanistan after U.S. troops pulled out in August, she knew she wanted to do something to help. She started calling around her church, the Westlake United Methodist Church, to see if anyone else wanted to join her in assisting Afghan refugees headed to the Austin area.

“We are a small church so it became a pretty apparent that I couldn’t do on my own,” she said. “People just started contacting me and saying how can I help?”

Finch quickly organized a number of other churches to help set up apartments for arriving families. Finch and her crew, which she described as a “very small group, but very dedicated,” work with Refugee Services of Texas to sign up for apartments to fully furnish ahead of each family’s arrival.

Finch was not alone in her effort to donate time, money and supplies to families arriving in Austin from Afghanistan. Austin has welcomed about 240 Afghan refugees between August and Dec. 1 after Afghanistan’s government collapsed amid the withdrawal of American troops. The Taliban took control of Kabul, Afghanistan’s capital city, which led to a crush of civilians at the city’s airport in a desperate bid to leave the country. Many religious organizations and interfaith groups rallied to provide furniture, food, and funds to new arrivals, including groups in Westlake and the Lake Travis area.

Finch said she was drawn to this cause because of the children who are coming over as part of the resettlement efforts. When she helps with apartment setups for families with kids, she said the group makes sure to include toys and stuffed animals on the beds.