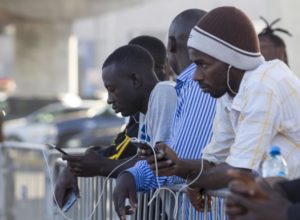 The number of African migrants heading to the U.S. through Mexico has more than doubled this year — from roughly 2,700 in 2018 to 5,800 today, according to data from the federal government.

That figure has been steadily rising since 2007 — the year the Mexican government began including migrants from African countries who have contact with immigration officials in their annual migration reports — when the number was 460.

And that dramatic increase has been mostly left out of U.S. immigration conversations, activists say.

“Even within the immigration movement, you see a lack of visibility of black narratives with what is happening at the border,” said Guerline Jozef, director and co-founder of the Haitian Bridge Alliance, an organization that helps black migrants from all over the world.

Jozef was initially caught off-guard by the number of black migrants south of the border.

In 2016 she didn’t know how to respond to a call she got about a group of Haitian migrants in Tijuana. She couldn’t understand why they were in Tijuana instead of Florida, the more traditional migration route for Caribbean migrants.

“At the time, honestly, I did not believe it,” she said.

But she went anyway and met with 12 Haitian migrants. She stayed a month and counted more than 400 black migrants from not just Haiti but Congo, Cameroon, and Sierra Leone as well.

“Now, almost four years later, we have thousands and thousands of black migrants,” she added.

The overwhelming number of people who travel through Mexico to get to the United States continues to be from Central America. The journey isn’t easy, many of them are robbed and beaten while traveling north.

On top of these dangers, African migrants face additional obstacles in terms of language and cultural barriers. They also have less access to services from legal aid organizations who do not have staff who speak the same language as the migrants.

They also face racism and discrimination because of the color of their skin, Jozef added.

This summer the migrants faced a new obstacle at the Mexico-Guatemala border. They are being prevented from reaching the U.S. border, according to activists on the ground.