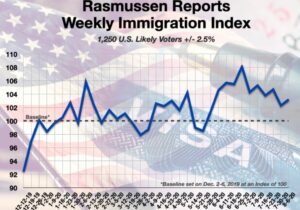 The Index is based on a series of questions designed to determine whether voters are moving toward an immigration system that encourages more immigration to the United States or a one that reduces the level of immigration here. (To see survey question wording, click here.)

All surveys are compared to a baseline – set the week of December 2-6, 2019 – which has been given an Index of 100. A weekly finding moving up over 100 indicates growing support for a more expansive immigration system. A weekly index number falling below 100 indicates increased support for a more restrictive immigration system.

Sixty-one percent (61%) continue to believe the government should mandate employers to use the federal electronic E-Verify system to help ensure that they hire only legal workers for U.S. jobs. Twenty-two percent (22%) disagree, with 16% undecided.

A federal court recently upheld the Obama-era Deferred Action for Childhood Arrivals program meaning that new applicants will be accepted for the first time in three years. Fifty-nine percent (59%) of voters favor giving lifetime work permits to most of the approximately two million illegal residents who came to this country when they were minors, with 35% who Strongly Favor it. Thirty-three percent (33%) remain opposed, including 17% who are Strongly Opposed.

Forty-four percent (44%) also favor giving lifetime work permits to most of the estimated 12 million illegal residents of all ages who currently reside in the United States, including 23% who Strongly Favor it. Forty-seven percent (47%) are opposed, with 27% who are Strongly Opposed.