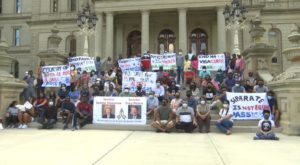 The group is pushing for senate bill 386 to be passed.

The bill would eliminate the seven percent per country cap, which would allow people to get their green cards sooner. It would also allow people to travel and more jobs without losing their status, as well as protecting children from having to be deported when they turn 21 years old.

Participating in the rally was Aarti Phatke, who will be a high school senior this year. With excitement about college, also comes the worry about turning 21.

“I’ll be separated by my family and forced to go to a country that I don’t really know anything about,” said Phatke.

She says her family moved to America when she was only five years old and the ability to stay in the U.S. is why she came out to rally. For others, like Rohan Nahadik, he says he wants to be able to travel freely.

“I have legal documents to stay in this country, I’ve been staying here for ten years working legally for my employer, I still have that uncertainty that if I leave the country, and the immigrant officer denies my visa, I cannot come back and that’s unfair,” said Nahadik.

People marched downtown to the Capitol steps and shared their own personal stories about moving to America.

For Phatke, she says America is home to her.

“It’s almost like I don’t belong anywhere, because I’ve lived here my whole entire life but I’ve not been able to get the same rights as everyone else and I can’t go back to India because I don’t know that country so it’s like where do I belong? I don’t know, it’s like I belong no where,” said Phatke.