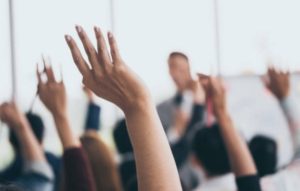 As much as one may support immigration and immigration reform, it is difficult to believe that any meaningful discussions about immigration can take place under the current political climate in D.C. If we cannot discuss important issues (2/3 of Americans believe this is the most important issue facing the nation), serious effective strategies need to be put in place to obtain a government that can function properly and legislate. Hate mongering is certainly not an effective way to legislate. Further, this Administration’s current abusive, immoral and extremist immigration reduction tactics have all failed as border crossings are rising. So clearly, our current government is not asking the right questions and therefore cannot find the right solutions. How can we allow that?

If the sight of the bodies of a man and his 23-month old daughter floating in the Rio Grande cannot move the hearts of the American people to end this gridlock in favor of a positive discussion, I am not sure what will. If Americans allow the most important issue in the U.S. to go unaddressed for years, then how weak are we as a nation? Or how ineffective are our political organs.

It is time for us to rise as a nation and sanction the political organs that are not hearing our voices. Let’s not vote for a political party next round of elections but vote for our nation. It is the only swift effective means that can change the course of history within the span of a night.