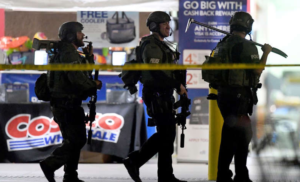 The audit, which was conducted at the request of state legislators, also found that the law enforcement agencies reviewed lack the capacity to guard against their officers developing these views, investigate them, or discipline bigoted officers in a systematic way.

The audit suggests a similar state of affairs in California, where major police departments in cities like Los Angeles, San Francisco, and Oakland have long been accused of racism and favoritism towards far right actors.

The auditors reviewed for bias in the Los Angeles County Sheriff’s Department, the California Department of Corrections and Rehabilitation, and the San Bernardino, San Jose, and Stockton Police Departments by reviewing a number of internal investigations into alleged officer misconduct and officer social media posts.

While the auditors found that while only a small number of officers had publicly expressed far right views or been investigated for racist, sexist, or homophobic conduct, the numbers are large enough to conclude that the law enforcement agencies must work to excise bias among their officers.

While the audit did not find that any law enforcement members are members of any white supremacist groups, auditors did find social media posts from six officers expressing support for such groups. In one, an officer defended the Proud Boys by saying that anyone who doesn’t support the organizations is “in reality just against masculinity.”