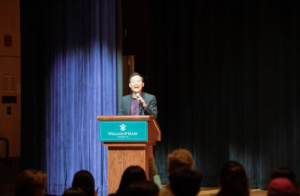 Saturday, Nov. 13, Democratic congressional candidate David Kim spoke at the Commonwealth Auditorium in the Sadler Center. Kim is running to represent California’s 34th district in the House of Representatives.

During the one-and-a-half-hour event, which the Asian American Student Initiative organized with support from the Government Department, Kim discussed his experience as an openly queer Korean American progressive running in a district with one of the largest Korean American populations in the country.

California utilizes a top-two primary system, in which candidates of all parties compete in the same primary election, with the top two candidates who recieve the most votes advancing to the general election. Kim is currently facing incumbent democratic candidate Rep. Jimmy Gomez (D) in a rematch.

After growing up during the 1992 Los Angeles riots — a period of civil unrest following the acquittal of LAPD officers charged with using excessive force in the arrest of Rodney King — Kim was inspired to work to better represent his community. Many Korean American-owned businesses were damaged during the riots.

As one of the few Korean American students in his community growing up, Kim said he made a point by running for student government positions. Kim also works as an immigration attorney and a member of the MacArthur Park Neighborhood Council, where he also served as president.

“Even though I am the one that they make fun of for smelling like kimchi or garlic… You know what? Forget about that, I think we need representation,” Kim said.

Kim cited his Asian American identity as a primary source of motivation. However, Kim’s view of representation extends beyond only working for others who are similar, but also involves working for every member of a community.

“The bigger and greater element is this deeper awareness of what where all of us are in this world, in this place, in the society and understanding that we didn’t choose what families we were born into, what classes you were born into, what background, communities, or levels of education,” Kim said in reference to his vision for community activism.