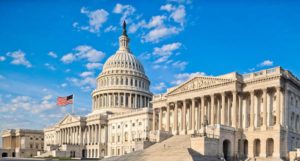 WASHINGTON — It’s beginning to look as though Congress’ election-year battle over immigration could end up in stalemate or a narrowly focused bill, not broader legislation like President Donald Trump has proposed.

The reasons: deep divides between the two parties; internal divisions, particularly among Republicans; and political incentives that might leave each side content with a minimal compromise or even nothing at all.

A look at where things stand:

Q: How did this start?

A: The struggle began as an attempt to find a bipartisan way to protect some young immigrants from deportation. About 690,000 “Dreamers” are currently shielded by the Deferred Action for Childhood Arrivals program, created by President Barack Obama to protect people who were brought illegally to the United States as children.

Trump, whose anti-immigrant rhetoric was a keystone of his 2016 campaign, said last year he was ending the program, claiming that Obama exceeded his legal authority to create it. Polls show wide public sympathy for these immigrants. Trump said he wanted to protect them, and he gave Congress until March 5 to find a way to extend the program. A federal judge has blocked Trump’s rollback indefinitely, pending a Supreme Court ruling.

Q: What does Trump want to do?

A: He’s proposed giving up to 1.8 million people protected by DACA, or potentially eligible for it, a 10- to 12-year path to citizenship. In exchange, he wants $25 billion to construct a wall along the Mexican border and otherwise fortify the border.

He also wants new restrictions that the conservative-leaning Cato Institute estimates could cut legal immigration by one-half million people annually. Legal immigrants could sponsor only spouses and minor children, not siblings, parents and others. A visa lottery for people from diverse countries would end, with its visas redistributed to other programs to slowly reduce their backlogs.

Q: Where is Trump’s plan going on Capitol Hill?

A: Nowhere. Democrats hate its cuts in legal immigration and can easily block it in the Senate. They say it would give Trump everything he’s sought for border security, leaving Democrats with no chits to trade for future efforts to help millions of other immigrants in the U.S. illegally but not under DACA’s protections.