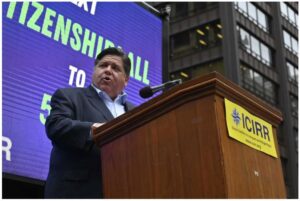 The Illinois Coalition for Immigration and Refugee Rights gathered community members and organizations to push for a pathway to citizenship and other immigration reform during a rally downtown Thursday.

The governor spoke Thursday to a crowd of about 500 people gathered outside the Thompson Center at a rally organized by the Illinois Coalition for Immigration and Refugee Rights (ICIRR) to push Illinois leaders to support immigration legislation.

“In Illinois, all our families deserve to feel safe and secure,” Pritzker said during his speech.

“I commit to you that my administration will continue working with ICIRR and with the Latino caucus and all of the ICIRR coalition to ensure that the Illinois Way Forward Act is signed into law,” Pritzker said. “Our moment is now, we need to get things done now.”

The Illinois General Assembly passed the bill May 31, and it was sent to the governor June 29.

Dulce Ortiz, the board president of ICCIR and executive director of Mano a Mano Family Resource Center, said the group wants to push the Biden administration to enact immigration reform and create a pathway to citizenship with the support of Illinois’ political leaders.

“It sends a message to the elected officials that we are here and we’re not going away,” Ortiz said. “And we are going to be persistent and we will get what they promised. This is about keeping a promise and this is us holding them accountable.”

“Let’s be clear, everybody that’s living here is a resident, and we’re all together and we’re all Americans,” Newman said to the crowd.