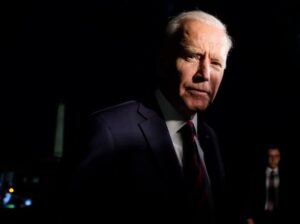 President Biden is in a tough place on immigration.

On one side, he faces growing pressure from supporters who want his administration to stop turning away asylum-seekers — and to invest more political capital on creating a pathway to citizenship for the nation’s 11 million undocumented immigrants.

On the other side, critics want him to do more to stop what has turned into the largest wave of migrants arriving at the U.S. southern border in recent history, with border agents averaging 6,300 encounters with migrants every day last month.

It’s against this backdrop that Biden spoke Monday to the nation’s largest Latino advocacy organization, UnidosUS.

In prerecorded remarks, Biden promised to continue to fight for undocumented Americans. “My administration will always have your back,” he declared.

Some of Biden’s supporters, like Ali Noorani of the National Immigration Forum, hoped his speech would be directed at not just his base, but more broadly to the American people — particularly to swing voters who are concerned about migration yet recognize the value of immigrants in their communities.

Noorani said Biden needs the backing of a much broader swath of Americans if he wants to build the support he needs to address immigration issues.

In his less-than-two-minute remarks, Biden did not address border security.

He instead spoke about protecting vulnerable immigrants brought to the country illegally as children, as well as fighting for a pathway to citizenship for much of the larger community of 11 million undocumented immigrants.