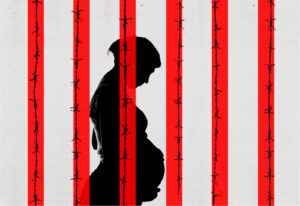 Two weeks after arriving in the US seeking asylum, E, 23, found herself in a detention cell in San Luis, Arizona, bleeding profusely and begging for help from staff at the facility. She was four months pregnant and felt like she was losing her baby. She had come to the US from El Salvador after finding out she was pregnant, in the hopes of raising her son in a safer home.

“An official arrived and they said it was not a hospital and they weren’t doctors. They wouldn’t look after me,” she told BuzzFeed News, speaking by phone from another detention center, Otay Mesa in San Diego. “I realized I was losing my son. It was his life that I was bleeding out. I was staining everything. I spent about eight days just lying down. I couldn’t eat, I couldn’t do anything. I started crying and crying and crying.”

Stuck in detention and having lost her baby, E says she wouldn’t have come to the US seeking a safer life if she’d known what would happen. She asked that her full name not to be used out of fear of repercussions while in detention and for her family back home.

“My soul aches that there are many pregnant women coming who could lose their babies like I did and that they will do nothing to help them,” she said.

About a week after speaking with BuzzFeed News, E gave up her fight for asylum, accepted voluntary departure, and was deported back to El Salvador.

In May, Attorney General Jeff Sessions publicly introduced the “zero tolerance” immigration policy that has led to children being separated from their parents at the border, sparked national outrage, and triggered an executive order from President Trump. While the national focus has been on family separations, another Department of Homeland Security policy quietly introduced by the Trump administration five months earlier has devastated women fleeing violence in their home countries: the detention of pregnant women not yet in their third trimester.