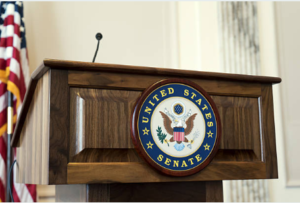 WASHINGTON — Almost exactly a year after the Supreme Court nomination of Brett Kavanaugh turned into a furious fight over judicial temperament, sexual misconduct allegations and political decorum, the Trump administration is facing what could be the 2019 version of the Battle of the Bench: the nomination of Steven J. Menashi for the influential Second U.S. Court of Appeals.

A deft and ambitious White House lawyer admired by Washington’s conservative elites, Menashi was nominated in August. Since then, progressives have pounced on his writings to paint him as a right-wing ideologue who does not belong on the federal bench. And his work as a top lawyer for the Department of Education has some worried that he could perpetuate some of the most controversial policies of Secretary Betsy DeVos, including more stringent standards for reporting sexual assault and tougher rules regarding financial aid.

“Steve Menashi would be Betsy DeVos in a robe,” says Lena Zwarensteyn, who directs judicial branch efforts at the Leadership Conference on Civil and Human Rights, a progressive advocacy group. “He is undeserving and unqualified for a lifetime position on the Second Circuit.” That is almost certain to be a major line of attack deployed by Democrats on the Senate Judiciary Committee, who will try to tether Menashi to DeVos, who is among the most controversial of Trump’s Cabinet members.

Democrats will just as certainly question Menashi on his work as a White House lawyer, where he has been involved in crafting the Trump administration’s immigration policy.

“It is going to be a tough fight,” acknowledged Mike Davis, a veteran Republican operative who recently founded the Article III Project, an advocacy group that helps install conservative judges. He vowed that his group and its allies on the right would “fight to confirm Menashi, a highly qualified nominee who is being unfairly smeared by the left.”