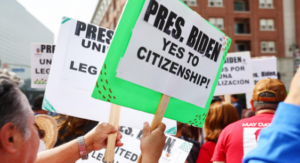 A majority of likely voters in five states with close Senate races in next week’s midterm elections support offering legal status to unauthorized immigrants in the U.S. under certain circumstances, a poll released Monday found.

Seventy-three percent of surveyed voters in Arizona, Georgia, Nevada, Pennsylvania and Wisconsin said they backed giving immigrants living in the U.S. without legal permission an opportunity to “earn” lawful status and ultimately citizenship if they meet certain requirements, including passing background checks.

Twenty-three percent of likely voters in the five battleground states said unauthorized immigrants should be deported, according to the survey, which was conducted by the Democratic polling firm Hart Research Associates and commissioned by the National Immigration Law Center’s Immigrant Justice Fund, the group’s political arm that advocates on behalf of immigrants.

The poll found that 74% of respondents would support candidates who favor placing “Dreamers,” or unauthorized immigrants brought to the U.S. as children, on a path to citizenship. Eighteen percent of the surveyed voters said they would back candidates who support deporting Dreamers.

The Obama-era Deferred Action for Childhood Arrivals (DACA) program, which allows approximately 600,000 Dreamers to work and live in the U.S. legally without fear of deportation, is currently under legal jeopardy after two federal courts declared the policy illegal.

Support for legalizing immigrants living in the country unlawfully, the survey found, was strongest among Democrats, independents and Latinos. Just 15% of Latino respondents did not express support for allowing unauthorized immigrants to secure legal status.

Proposals to legalize large groups of immigrants in the U.S. have faltered in Congress over the past two decades amid intense disagreements over issues like border enforcement. In recent years, many Republicans have vowed not to legalize unauthorized immigrants without tighter border controls.

While control of the House hinges on dozens of districts across the country, races in Arizona, Georgia, Nevada, Pennsylvania and Wisconsin could dictate which party holds the Senate, which is currently evenly split among Democrats and Republicans.