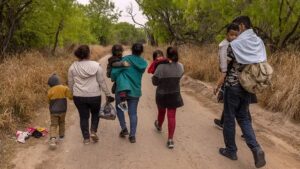 A vast majority of Americans approve of the idea of engaging countries abroad to address the causes of migration before it happens, according to a new nationwide poll released Thursday.

Pollster Civiqs found that 85 percent of survey respondents agreed that the United States needs to engage with other countries to address migration patterns.

On a partisan basis, 86 percent of Democrats and 87 percent of Republicans, as well as 81 percent of independents, agree with that approach, according to Civiqs, which conducted the poll for Immigration Hub, a progressive immigration advocacy group.

The Biden administration’s approach to surging apprehension numbers at the border is focused on addressing the so-called root causes of migration in Central America.

President Biden, in his first speech before a joint session of Congress on Wednesday, lauded the approach, led by Vice President Harris, which seeks to separately address acute causes of migration, like natural disasters, and long-term issues in the region, like bad governance and chronic violence.

The poll found that 57 percent of Americans accept illegal immigration when the immigrants are fleeing violence in their home countries.

“The American people want a smart and humane immigration system that effectively manages the border while allowing America to be the ‘shining city on the hill’ for people fleeing violence in their home country,” Sergio Gonzales, executive director of the Immigration Hub, said in a statement.

The poll also found more support for a high-tech approach to border security than for beefing up traditional enforcement and building a wall, but with substantial differences in support depending on partisanship and from region to region.