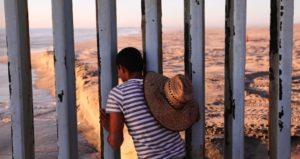 A doe-eyed girl stands on crutches — her right leg is gone. Rows of people cling to the roof of a train. A handcuffed couple gently holds hands. A dead body lies on the ground. A throng of new citizens recites the Pledge of Allegiance.

These are the subjects of just a few of the many images taken by photojournalist John Moore in his new book, Undocumented: Immigration and the Militarization of the United States-Mexico Border (PowerHouse, $50), which he’ll be discussing Friday at Deep Vellum Books in Dallas.

Moore, who grew up in Irving and graduated from the University of Texas at Austin, started working on the book about 10 years ago. When he returned from the Middle East in 2008 after witnessing the assassination of former Prime Minister Benazir Bhutto of Pakistan, his work for Getty Images took him to the border area. He was based in New York.

“In my early trips to the border, I was impressed with this dramatic human story of people seeking a better life against all odds,” Moore said in an interview Friday from New York.

Then, the drama increased. In 2010, Arizona had just passed a strict anti-illegal immigration law, which caused lots of protests.

“I could see the beginning of a movement in the U.S. and the fear by many Americans of undocumented immigrants,” Moore said.

Tensions flared even more when President Donald Trump was elected. These developments led to the idea of publishing a book of photos and text that tells the story of illegal immigration from all sides.

“I had been photographing immigration as part of my daily news reports for Getty Images and had been trying to cover immigration from as many different angles as possible,” Moore said. “It was only with the election of Trump that we decided to put this together in book form.”

The immigration issue has divided the United States since the country was founded. Moore mentions in his book how President Dwight Eisenhower in the 1950s ordered the deportation of more than a million Mexicans.