Home Resources Perspectives on immigration, from the U.S.-Mexico border 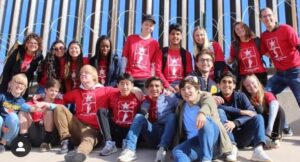 Growing up along the United States-Mexico border has given Enrique Carrasco, an incoming first-year student at La Salle University, a unique vantage point to immigration issues that many learn about only through the media.

Carrasco, who emigrated to Texas from Mexico with his family as a child, shared his perspective on immigration with others while attending Cathedral High School, a Lasallian Catholic school in El Paso. For three years, Carrasco served as president of a program called El Otro Lado (Spanish for “the other side”), through which he helped educate visiting students from other Lasallian high schools and colleges across the United States about life on the border with immersion trips.

“We’d talk to them about the immigration laws on the U.S. side, and show them the conditions of life on the Mexico side,” said Carrasco, who will major in political science at La Salle. “We would go up to the border wall, right across from the Mexican city of Juarez, and show them the houses made from cardboard and the people living there in this really bad neighborhood. … That gave (the visiting students) perspective on why people come to the U.S. illegally.”

While Carrasco worked throughout high school to help broaden the minds of other Lasallian students regarding immigration, he said his Lasallian education at Cathedral was important in allowing him to gain perspective on his personal heritage.

“Cathedral really brought out the Hispanic side in me,” said Carrasco. “Before that, I really didn’t interact with a lot of Latinos. I lived in a little town outside of El Paso called Horizon City. It’s near an Army base called Fort Bliss, so there was a lot of military people, and not many Latinos. Then I went to Cathedral, where 50 percent of the student body is Latino, and the teachers and staff were so supportive.