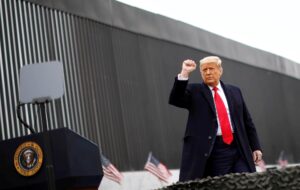 It was not immediately clear if the Biden admin’s plan would permanently all wall projects along the border, like those paid for from the DHS budget.

WASHINGTON — The Biden administration announced Friday that it would cancel all construction on the border wall that was paid for using redirected military funds, a Defense Department spokesman said.

The Trump administration increased its use of Defense dollars to build portions of the border wall after Congress refused to appropriate money toward the project in early 2019.

On Friday, Deputy Pentagon Spokesman Jamal Brown said, “Consistent with [President Biden’s] proclamation, the Department of Defense is proceeding with canceling all border barrier construction projects paid for with funds originally intended for other military missions and functions such as schools for military children, overseas military construction projects in partner nations, and the National Guard and Reserve equipment account.”

In a statement, Rep. John Garamendi, D-Calif., chair of the Readiness Subcommittee of the House Armed Services Committee, criticized the Trump administration’s diversion of funds, saying, “No president should be allowed to circumvent the Constitutionally defined power of the purse that was bestowed upon Congress. … [T]oday’s announcement is a victory for our troops, our nation, and our Constitution.”

It was not immediately clear if the Biden administration’s plan would permanently all wall construction projects along the southern border, such as those paid for from the Department of Homeland Security’s budget, but those projects remain on pause.