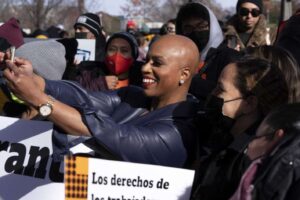 A recent report shows that if pending immigration bills in Congress were passed, hundreds of thousands of undocumented immigrants in the Houston area could benefit and become legal residents or citizens, improving their quality of life.

The Center for Migration Studies, a New York-based immigration think tank, found that if the American Dream and Promise Act of 2021 were to pass, 12 percent of greater Houston’s 576,500 undocumented immigrants — 70,600 people — would be eligible for green cards, allowing them to live and work in the U.S. with authorization and free from the threat of deportation.

The bill would protect undocumented immigrants brought to the U.S. as children as well as immigrants eligible for Temporary Protected Status in 2017. Venezuelans and others allowed to stay in the country under Deferred Enforced Departure would also receive protections under this legislation.

The American Dream and Promise Act passed in the House of Representatives last March but has failed to get traction in the Senate, which has a 50-50 partisan split.

Under the Dream Act of 2021, which protects childhood arrivals, an estimated 388,000 undocumented immigrants in Texas would be eligible for permanent residence — more than any other state, except California. Nearly half of these immigrants have been living in the U.S. for 15 years or more, according to the center’s calculations.

The authors of the report also cited multiple studies showing that legalization programs – which haven’t been passed by Congress for decades – benefit immigrant families and their citizen children by creating labor opportunities, increasing access to education and removing the stressors around the fear of deportation.

Failure to pass reform has also affected the immigration legal system, which is increasingly more backlogged, with massive delays for certain visas and asylum cases.