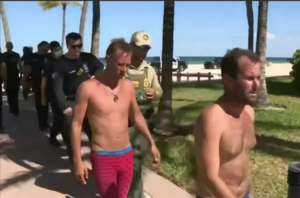 MIAMI-DADE COUNTY, Fla. – Amid an ongoing surge in Cuban migration, both on the shores of South Florida and at the U.S.-Mexico border, a South Florida immigration attorney says inconsistent immigration laws could be helping to fuel the uptick, as people flee the economically-distressed island.

In one notable landing this week, 15 migrants arrived in a rustic boat on Haulover Beach in Miami-Dade County.

Attorney Wilfredo Allen told Local 10 News that his practice has transformed over the past year. As thousands of Cuban migrants arrive to the U.S., he now mostly attends to newly-arrived clients from the island.

“The only consistent nature of how the border works is the inconsistency,” Allen said. “Everybody is being given different papers.”

Allen is on the front lines in dealing with an immigration system that is by all accounts unclear.

Even though the “wet foot, dry foot” policy for Cubans ended in 2017, a significant chunk of those who reach land are allowed to remain. In many instances, their fate depends on the judge to whom they are assigned and the border agents who interdict them.

“In a family of dad, mother and 18-year-old daughter, that daughter was the one given parole, but also given a GPS device,” he said. “Why would you put a GPS device on an 18 year-old girl who is going to go to high school here?”

“There are certainly protections and processes in place for migrants who do make it ashore and subject to asylum and credible fear determinations,” McPherson said.

Border agents continue to repatriate those interdicted at sea.

Andy Gomez, a Cuba expert with the University of Miami, said he worries that as the exodus intensifies, Cuba may stop allowing the U.S. to return those migrants.