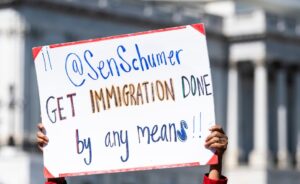 The Senate parliamentarian on Wednesday ruled against Democrats’ plan to legalize undocumented immigrants by updating a decades-old immigration registry, the latest blow to lawmakers’ efforts to include major immigration changes in their reconciliation package.

The decision is a major setback for Democrats, who have promised to overhaul the immigration system as part of their sweeping $3.5 trillion budget reconciliation bill to remake American social programs.

Following her meeting Wednesday with Senate Democrats, Parliamentarian Elizabeth MacDonough rejected plans to update the immigration registry through reconciliation, according to a Senate aide.

MacDonough told lawmakers that updating the registry would be a “weighty policy change,” according to materials obtained by CQ Roll Call. She hinted that any bill adjusting the status of millions of undocumented immigrants would not pass muster under Senate rules for budget reconciliation bills.

“The change in status to LPR [lawful permanent residency] remains a life-long change in circumstances the value of which vastly outweighs its budgetary impact,” she said.

“As people live desperate lives for fear of a knock on the door and no future for the kids, unfortunately we can’t find the language to clear for the reconciliation that might help them,” Durbin said. “But yeah, we’re gonna keep trying.”

Earlier this month, the parliamentarian rejected Democrats’ original plan to create a pathway to citizenship for immigrants brought to the U.S. as children, essential workers, and people fleeing countries in crisis.

After that initial ruling, lawmakers vowed to try again with a different plan. The budget reconciliation package, which can pass with a simple majority, is likely Democrats’ best chance for the foreseeable future to make any headway on immigration policy.