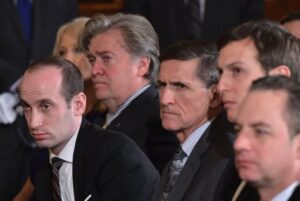 The flurry of pardons for significant perpetrators of fraud and drug crimes may have revealed that insincerity resided at the core of the Trump administration’s immigration policies. Officials said the border wall and Trump’s business immigration policies were designed to fight fraud and keep out drugs and bad people. However, to put it simply, the pardons show it is unlikely Donald Trump enacted restrictive immigration policies because he cared about stopping fraud.

On April 18, 2017, in one of his first major immigration policy directives, Trump issued the “Buy American and Hire American” executive order. A key part of the order was to protect the interests of U.S. workers “through the prevention of fraud or abuse.” White House adviser Stephen Miller “told the Associated Press that USCIS [U.S. Citizenship and Immigration Services] was plagued by a ‘huge amount of fraud.’”

After four years, the evidence indicates that “prevention of fraud” in the Trump administration turned out to be a way to prevent immigration.

“The Trump administration failed to show that employment-based immigration programs had statistically significant levels of fraud,” said Dagmar Butte of Parker Butte and Lane in an interview. “From the data presently available, it does not appear the levels are any higher than they were when the Bush administration created the Fraud Detection and National Security Directorate for employment-based immigration. The Trump changes in policy increased costs for employers who needed the talent and desperately wanted to follow the rules to get it. It also created anxiety and harmed the workers who wanted to earn a living and contribute to the U.S. economy.”

“Trump administration policies didn’t prevent fraud but discouraged employers and workers from participating in these immigration categories, given the barriers to entry and continued participation,” she said. “That seems to have been the real purpose of these initiatives.”