Home Federal Enforcement Panicked over coronavirus, immigrant detainees plead to be released: ‘I am afraid for my life’ 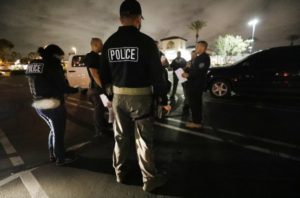 For weeks, as the coronavirus spread rapidly, Jose Hernandez Velasquez worried about the dangers of being detained inside the Adelanto ICE Processing Center 80 miles east of Los Angeles.

The 19-year-old Guatemalan immigrant listened uneasily as other men called their families, begging them to do everything possible to get them released so as to reduce their odds of contracting the deadly illness.

On Thursday, in light of the pandemic, a federal judge ordered immigration authorities to release Hernandez, an asylum seeker with hypertension who had spent nearly 2½ years at the facility in the high desert. When a guard came to tell him the news, Hernandez was speechless. Other detainees nearby burst into applause.

“I was really worried,” he said in a phone call after his release. “It was so difficult to be inside.”

As an increasing number of Immigration and Customs Enforcement detainees across the country test positive for COVID-19, California lawyers are working to free as many clients as they can by invoking constitutional rights and arguing on humanitarian grounds. In the last week, U.S. District Judge Terry Hatter Jr. ordered at least 10 people released from Adelanto, one of the country’s largest detention centers, holding nearly 2,000 people.

It’s unclear how many detainees have been released nationwide due to coronavirus concerns. In recent weeks, federal judges across the country have ordered the release of over 40 detainees.

In response to the pandemic, Immigration and Customs Enforcement has instructed field offices to assess and consider for release those who were deemed to be at greater risk of exposure, reviewing cases of individuals 60 and older, as well as those who are pregnant. As of March 30, 600 detainees were identified as “vulnerable” and over 160 have been released from custody, according to the agency.

“Due to the unprecedented nature of COVID-19, U.S. Immigration and Customs Enforcement is reviewing cases of individuals in detention who may be vulnerable to the virus,” the agency said in a statement Tuesday.