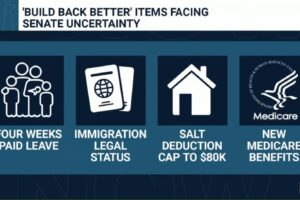 A number of provisions may be revised or removed to meet the rules and keep all 50 Democratic-caucusing senators together.

WASHINGTON — President Joe Biden’s safety net and climate change package passed the House on Friday and goes to the Senate next, where it is likely to be changed before it can become law.

Some provisions of the $1.68 trillion bill may be removed or revised to win the support of all 50 Democratic-caucusing senators, from blue state progressives like Bernie Sanders, I-Vt., to red state moderates like Jon Tester, D-Mont., and Joe Manchin, D-W.Va. Other policies could be thwarted by Senate rules.

“There’s going to be some changes,” Tester said Sunday on NBC’s “Meet the Press.” “We’re dealing with reasonable people here. I think we can come up with a bill that’s a very, very good bill that works for states like Montana and other states in the union.”

The Senate is expected to turn to the legislation after it returns next week from Thanksgiving recess. Before it can come to a vote, the bill will require a “Byrd bath” — a process named for the late Sen. Robert Byrd, D-W.Va., under which provisions are scrutinized for compliance with arcane budget rules. It will also require a “vote-a-rama” allowing virtually unlimited amendments, during which Republicans will seek to remove or edit provisions and force politically difficult votes.

A single successful change could disrupt or scuttle the delicate deal among Democrats, which puts extra pressure on party leaders to keep senators unified.

“We’re in very good shape to get 50 votes,” he said. “But there are different ways — parliamentarian and other ways — the Republicans could try to knock it out.”

Here are the provisions that are most likely to change.