Home Resources Our View: John McCain Wins a Battle of Wits with Trump on Immigration – and Anything Else 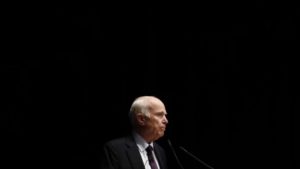 When it comes to a battle of wits between John McCain and Donald Trump, we’ll put our money on Arizona’s senior senator. Anytime.

McCain demonstrates why in his new book.

A skilled politician, McCain nevertheless has a rare talent for cutting through the political detritus on matters of national importance.

He makes it clear in “The Restless Wave: Good Times, Just Causes, Great Fights and Other Appreciations” that immigration is one of those areas.

We all know why we need reform

The need for comprehensive immigration reform has been widely understood for many years. The status quo of a badly broken system costs the United States in ways that range from economic to humanitarian:

* Thousands of people have died trying to cross our southern border.

* The country has a continuing need for migrant labor for agricultural, construction, home care and other industries.

* Families are being torn apart by immigration enforcement efforts designed to look harsh, instead of prioritizing deportations based on security concerns.

* The lives of “dreamers,” who are de facto Americans, remain in limbo as politicians benefit from staking out extreme positions.
McCain is characteristically blunt about why immigration reform hasn’t happened.

Calling his inability to achieve immigration reform “a harder disappointment than other defeats,” McCain articulates the need to keep working for this goal that “most Americans want, and most members of Congress know is the right thing to do.”

Why didn’t we do the right thing? Fear

“But most of all, because it’s something this country needs to do now, in this political moment, as old fears and animosities that have blighted our history appear to be on the rise again, exploited by opportunists who won’t trouble their careers or their consciences with scruples about honesty or compassion for their fellow man.”