Home Uncategorized Opinion: Trump Drops a Bombshell on Immigration, and No One Bothers to Report It 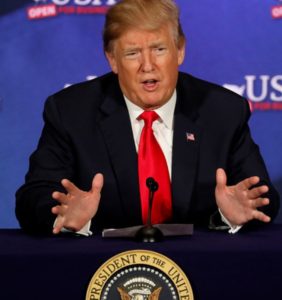 Perhaps it’s because the comment came on a Saturday, or perhaps it’s because less than 24 hours earlier he had suggested America’s top ally was suffering from mass knife attacks, but President Donald Trump this weekend very quietly dropped a bombshell.

It came at a roundtable on tax reform held in Cleveland. Here’s what the president said, after making a no-longer-true comment that the stock market being up 35% since his election in 2016. (The S&P 500 SPX, +0.35% is up about 25% since the election, with this year’s turmoil accounted for.)

Reporters’ jaws didn’t exactly drop at the remark. You won’t find it in the accounts of the speech by the Associated Press, CBS News or the New York Times.

That could be because Trump has long supported a merit-based immigration system, and derided the U.S. lottery system. That’s not new.

And technically, even the harsh legal-immigration bill he supported, called the Raise Act, would allow for more legal immigrants to come into the country. But it would cut their numbers in half.

Still, the emphasis — from Trump — that the U.S. will need to expand its workforce by importing labor, is new.

It’s a point that economists, derided by Trump and his supporters, have been making for some time.

America’s getting older. The job market’s tightening — by how much remains a debate, but everyone acknowledges it’s tightening.