Home Resources Opinion: I Won My Asylum Case, But The Government Still Won’t Release Me 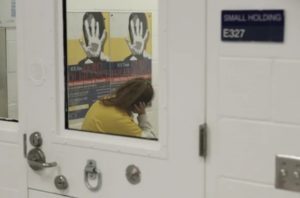 I survived violence in El Salvador. And I can tell you that immigration detention in the US feels similar to the abuse I fled — I’ve felt violated, traumatized, and destroyed while locked away here.

I was almost done with my asylum case when I was detained — I had even received an employment authorization card and a social security number. I won my asylum case this May, after six months of detention in Yuba County Jail, which has a contract with ICE to imprison immigrants. The same judge that granted me asylum denied my request for a renewed bond hearing and the chance to be released and reunited with my family.

Even if I were granted bond, before I could be released to my family the immigration judge, who heard all of the traumatic events I have lived through, would have made me pay thousands of dollars to ensure that I would come back to immigration court. The government attorney heard countless hours of my testimony explaining why I cannot go back to my country, yet he appealed the immigration judge’s decision and is fighting tooth and nail to keep me detained in a cold cell.

I’ve now been separated from my family for more than 10 months. The complicated and aggressive immigration laws and policies have prevented me from celebrating my baby’s first birthday, one that is so special and memorable for a mother. Though my baby was born premature, I only spent two months with him before I was detained on my first day back to work, due to false allegations in an Interpol Red Notice made six years after I settled in the Bay Area.

I may not know how to read or write, but I know that what I am living through — what thousands of detained immigrants are living through — is a real injustice. It almost feels like there are two countries: one for everyone else, and one for survivors of violence like me. Ours is a country that humiliates and dehumanizes us through a system where allegations are considered true until proven otherwise.