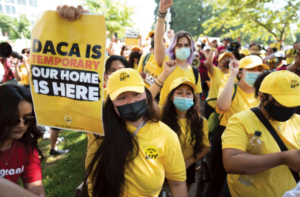 The midterms are over. Democrats survived the chaos at the southwestern border. Some pro-immigrant groups are daring to hope political space may open in the next Congress for bipartisan immigration reform.

It won’t. Republicans’ attempt to weaponize images of immigrants massing at the border failed to deliver a landslide. But that doesn’t mean the politics of immigration have become non-toxic.

Rational reform, of the kind that might relieve the nation’s overwhelmed border and turn immigration into some legal, humane process remains as far beyond the reach of the American political system as when Donald Trump came down the golden escalator and launched himself into the presidency by calling Mexicans thugs and promising a border wall to cut them off.

Across MAGA America, immigration has brought to the fore passions that will not be contained by appeals to economic logic. It will be met first and foremost with mistrust, anger, fear. Rather than focus on the benefits that immigrants bring to rich aging societies, millions of Americans choose to believe that the foreigners come to replace them.

Even President Joe Biden, who promised to end Trump’s COVID-era deportation policy, deployed it to stop Venezuelans from seeking asylum in the U.S. Rather than tear down Trump’s border wall, he is filling in some particularly trafficked gaps in it.

MAGA America’s fear of immigrants will not only stand in the way of sensible policy on immigration. It can still steer Americans into a very dark place.

What would become MAGA America was a more contented place the last time the political system delivered “comprehensive immigration reform.” The nation was held together by the threat posed by a common Soviet enemy. China was poor and rural. Globalization wasn’t yet a thing. Critically, non-whites amounted to only 20% of the population. The most famous living Latino was Desi Arnaz.