Home Politics On Politics: Biden Running Out Of Time On Immigration Reform 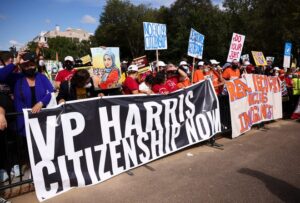 Last night, the House passed legislation raising the nation’s debt ceiling for several weeks, allowing the government to keep paying its bills into early December and avoiding the economic chaos that would come if the U.S. defaulted.

The measure, which lifts the ceiling by $480 billion, heads to President Joe Biden to sign.

If the U.S. had defaulted on its debt for the first time, the results could have led to a global recession, Treasury Department officials and experts have said. A tanked market would hurt 401(k)s and other investments.

But Congress isn’t done yet. They’ll be tasked with finding a more long-term solution when this deal ends in early December.

It’s Amy with today’s top news out of Washington.

Congressional Democrats have faced several setbacks in their attempts to include immigration proposals in Biden’s $3.5 trillion budget package, and advocates said time is running out to pass comprehensive reform before next year’s midterm elections.

“We can’t wait. … Now’s the time that Congress and the president and vice president have to make citizenship for all a reality in this country,” said Alonzo Washington, chief of federal policy for CASA, an immigrant rights organization.

Activists are frustrated with the progress, questioning whether Democrats and Biden have the political will to deliver on the campaign promises they made related to immigration.

In their effort to include a pathway to citizenship for undocumented immigrants in the budget package, Senate Democrats presented two proposals last month to Senate Parliamentarian Elizabeth MacDonough. MacDonough, a nonpartisan, unelected staff member, determines whether policies included in the reconciliation package abide by the Senate’s Byrd Rule, which states only policies that have a direct impact on the federal budget can be included.